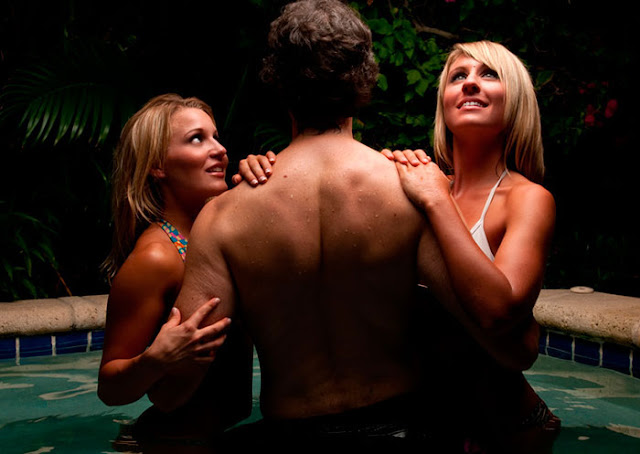 She was cute. Before she came and told us, we didn’t know that it was her first time too. I said “that’s alright. We will be learning the same time”. Even though my friends told me that it would be better if we could find someone who is more experience than us. I didn’t take t seriously. From my own thinking, it’s just lovemaking. Who can’t do that?

We invited her to our house and had a dinner together. To get acquainted with each other, we decided to play games---strip poker. The best game for friends with benefits. As everyone was naked, I made the first move by kissing my wife. The other girl watched us by the side. Then I kissed her for a few seconds. After that, she kissed my wife. This was like a greeting with each other. Then we went for a three way kiss. It was a little crowded, but I got used to it. Since we were already naked, there would be no clothes to be took off, which made it more convenient for everyone.

Just when I was getting the hang of it, I was kissing my wife and robbing the butt of the other girl, my balls got kicked heavily. I shouted out loud “Ouch!” Everyone stopped. The other girl said “Oh my god, I am so sorry. Are you okay?” I knew it was her who kicked me on the balls. I was so in pain that I couldn’t speak a word. The sharp pain went on for like 2 minutes. My wife and the other girl sit next to me and kept asking if I was okay. I said I was okay, but I just need a few minutes. That was what I thought. I did want to keep going after a few minutes. After all, we already went this far and it took my wife and I several days to find a suitable threesome partner and then took days for us to make a proper time.

However, a few minutes later, I still cannot perform. I got worried. The pain has gone, but I couldn’t get hard. I gave up and so did they. After the girl was gone, my wife took me to the hospital and got some medicine. I am okay now, but left with terrible memory.
Newer Post Older Post Home